NGO slams Draft CZMP for ‘lots of of errors’

Goa Basis objects to 30-day interval to submit options, objections to draft CZMP; Seeks extension by one other 30-days as per the foundations in drive

PANJIM: NGO Goa Basis has alleged that the errors identified by villagers within the earlier draft Coastal Zone Administration Plan (CZMP), have been ignored by the Chennai-based Nationwide Centre for Sustainable Coastal Administration (NCSCM) whereas redrafting the brand new plan, which has lots of of errors.

Goa Basis in a letter to Goa Coastal Zone Administration Authority (GCZMA) member secretary has raised robust objection to 30-day time interval granted to submit options and objections to the draft plan and has demanded {that a} recent public discover be issued extending the time by one other one month, until March 30, as per the foundations. The 30-days interval lapsed on February 28.

The Basis alleged that a number of gross errors have been allowed within the draft CZMPs. Re-zoning of seaside areas like Querim (Tiracol), Palolem, Cola have been carried out with none authorized foundation.

“The drafts have lots of of errors. On essential options, they’re a serious catastrophe. The matter can’t be rushed on this method. A nasty and incompetent CZMP is worse than no CZMP. We’re keenly concerned with a CZMP that accurately information details about the coast and communities,” GF director Claude Alvares stated.

The Basis blamed GCZMA for placing up the maps for the general public listening to with out analyzing them first. “Because of this, all of the errors identified by village communities through the 2019 public session have remained within the new draft plans. This solely means all village stage inputs into the plan course of have been ignored. That is wholly unacceptable,” Alvares identified.

Alvares stated that the 30-day restrict was not authorized, because it was opposite to the 60-day restrict supplied by the Setting Safety Guidelines, 1986, which is the premise for the general public listening to procedures.

Alvares stated that the 60-day interval is unconnected with the general public listening to course of. He stated that the persons are welcome to make their perspective felt through the public listening to, scheduled on March 7, but additionally have the fitting to file detailed written objections earlier than March 30 – the top of the 60-day interval.

“The general public session is the one discussion board out there for the general public – and environmental teams like ours – to voice their objections and issues to the drafts. We’d like the time given,” he stated. 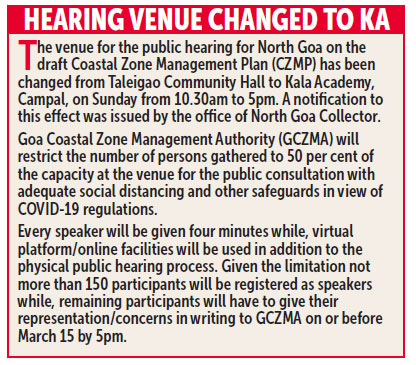